So when Bobby was invited to appear on the nationally syndicated Mike Douglas Show,  she did what any responsible chief executive would do:  She had her mom call school and say she’d be out sick that day.

“I’m in the audience,  it’s live,  and Mike and Bobby are singing,”  Linda recalls.

Then Bobby pointed to her,  and Mike led her to a stool next to Bobby while they sang,  “You’re Nobody ’Til Somebody Loves You” to her.

(Shock tactics:  The president of Bobby’s Detroit fan club – who probably also skipped school – took this photo from her TV screen – the only image Linda has from that day.)

“I still remember seeing my face on the TV monitor while I looked around in shock.   The audience was in stitches.”

From there she moved to a seat onstage where Mike introduced and interviewed her.

And,  yes,  Bobby later confessed that he kept it a secret so she wouldn’t panic in advance,  but it didn’t help when he mentioned on-screen that she’d cut school to be there….

As any Catholic school kid can tell you,  the Discipline Office is the last place you want to be called,  and Linda predictably received an invitation the next day,  where she found three nuns waiting for her.

And,  yes,  they had questions.

“Is Bobby Rydell as nice as he seems?”

“I taught him at Epiphany parish.   Does he remember me?”

“Can we get some autographed photos?”

(A more composed Linda with Bobby on the Mike Douglas set in 1966.)

Then Camille called Linda in the 1990s:   Bobby was performing as one of the Golden Boys with friends Frankie Avalon and Fabian.   His career was flourishing.   Would Linda write material for a new Bobby Rydell website?

The answer was yes.

TAKE  ME  TO  BOBBY  RYDELL  BOULEVARD

In 1995,  Linda had an inspired idea,  one that required getting every homeowner in his old neighborhood to sign a petition and testifying before the city council:   As South Philadelphia’s longest and most enthusiastic ambassador around the world,  why not name a stretch of 11th Street near Moyamensing Avenue after him?

With Camille’s blessing,  Linda mobilized his fan club membership and got the unanimous support of the neighbors – and the council.

When the TV and radio stations started calling his house,  Bobby was on the golf course with Frankie Avalon,  totally unaware of Linda’s secret campaign.

(Bobby addresses the crowd at the dedication of Bobby Rydell Boulevard,  following a parade down 11th Street and speeches by Mayor Ed Rendell and others.)

So,  when Bobby’s marriage to Linda Hoffman was announced in January,  2009  (Camille had passed away in 2003), the Philadelphia Inquirer naturally reported that he had married his fan club president.

The two Linda Hoffmans lived in the same town,  had the same doctors and dentists,  and shopped in many of the same stores.   Each knew of the other’s existence but they had never met,  even though now-wife-Linda would mistakenly receive phone calls meant for Bobby’s fan club.

Then,  in 2007,  a mutual friend introduced Bobby and the second Linda Hoffman,  and the rest – as they say – was major confusion… 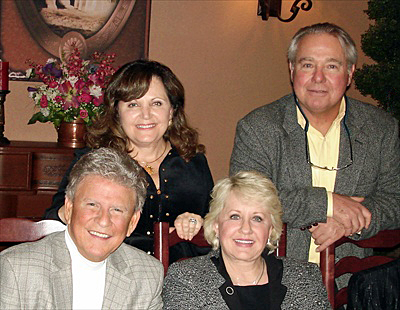 (The two Linda Hoffmans in 2011 with husbands Bobby and Jake.)

Today,  Linda Ferrino Hoffman is still Bobby’s assistant,  managing his website and social media,  and accompanying him at local signings of his new book,  Bobby Rydell: Teen Idol on the Rocks: A Tale of Second Chances.

Sometimes,  I guess,  you really have to listen to mom.

(Linda with her mom Gloria Ferrino and daughter Jenna Hoffman)

KEEPING   UP   WITH   UNEXPECTED  PHILA.

Interested in keeping up with our blog by email?   Just click on the black  “Follow”  button at right (near the top of the blog)  after typing in your email address there, and you’ll receive a notice every time we post an entry.

And,   no,  we do not accept or send ads,  and we’ve never received an unwanted email from WordPress,  our blog platform.

Click here to see more great 1960s photos from Art Tavani’s South Philadelphia photo album on our website,  and here to see all our blog posts about the adventures it inspired….