You can’t make this stuff up….

Last June,  we told you about a magical,  12-pound photo album that a friend gave us as a housewarming gift when we moved to East Passyunk Avenue.

Inside were over 200 photos of local and national celebrities,  politicians and “just plain folks” from the mid-1960s,  collected by South Philadelphia columnist and photographer Arthur Tavani. 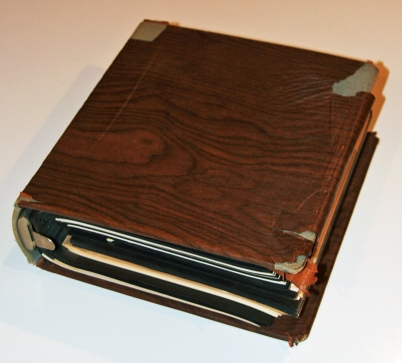 (Art Tavani’s magical photo album.  Click here to see a sample of what it contains.)

Among the instantly recognizable faces,  of course,  were three photos of South Philadelphia heart-throb Bobby Rydell…

So,  following my mom’s dictum of charging in with “more guts than brains”,  I emailed the three photos to Bobby’s website in January,  2014,  asking if he’d help identify the people in them… 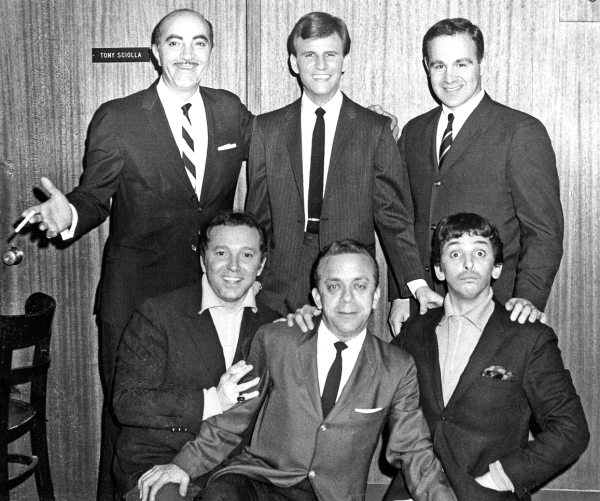 (That’s Art Tavani in front center,  with Bobby Rydell behind him.  The door plate identifies this as Sciolla’s Supper Club,  521 W. Pike Street in North Philadelphia,  but who are the other four guys?)

If you’ve been following our photo album blog posts,  you know that our journey to identify the people in Art’s fabulous album has been packed with coincidences,  and this time the Universe outdid itself.

“Well hello!  Today is your lucky day,”  read the return email from Linda Ferrino Hoffman,  in what must have been the year’s biggest understatement.   “I am Bobby Rydell’s assistant and Arthur Tavani was actually married to my first cousin,  Theresa Settembrino Tavani.   I knew him well.”

(Bobby Rydell with Art Tavani at Sciolla’s Supper Club.   Are we the ONLY people in South Philadelphia who never met Art?)

“Art took pictures of every family event we had,”  Linda wrote,  “so I have lots of fond memories there.”

And,  yes,  she immediately identified three of our four mystery people… 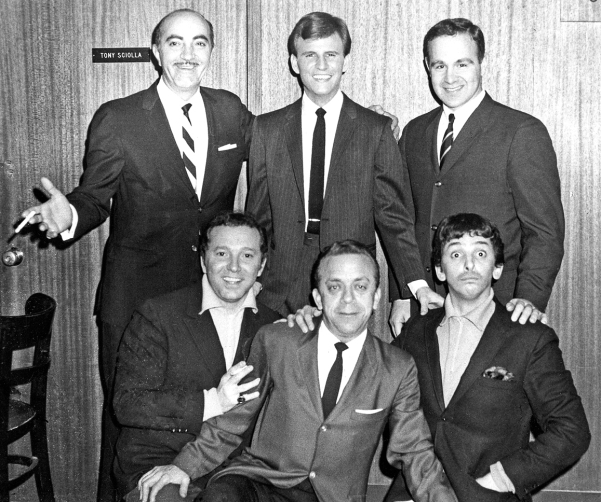 (The Day Brothers comedy team – Tommy,  left,  and Donny,  right – mug with Art in the front row.   Named for Bobby’s manager Frankie Day,  their real names were Thomas and Domenick DeGaetano.   Gus Pitucci,  owner of South Philly’s iconic Bambi Cleaners is at back left,  but who is the other man?)

Linda also arranged for Bobby to look through Art’s album that summer,  and he identified many more people we didn’t recognize – which is great news for Temple University’s Urban Archives,  where we’ll ultimately donate the album.

But it soon became clear that Linda Ferrino Hoffman,  Bobby’s long-time assistant,  was a story in herself.

Like young girls all over America,  she fell in love with Bobby and his music when he first sang “Kissin’ Time” on American Bandstand.

Unlike the others,  however,  she became his national fan club president….and was featured on the Mike Douglas Show with him….and still serves as his assistant,  managing his website and social media. 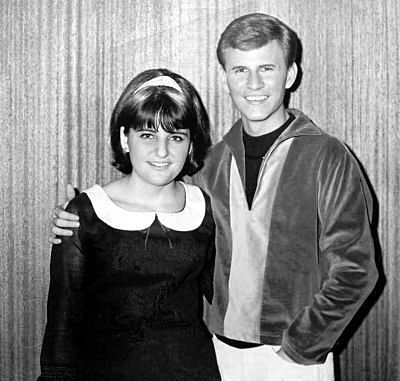 (Linda Hoffman – then Linda Ferrino – at Sciolla’s Supper Club with Bobby in 1965.)

She even confusingly shares the same name as Bobby’s wife – another Linda Hoffman – but I’m getting way ahead of my story here…..