It was Easter weekend,  1960,  and young Linda Ferrino was pouting – big time.

She and her young-at-heart mom had both been smitten by Bobby Rydell when he sang “Kissin’ Time” on American Bandstand.   It had even been her mom’s idea to watch.

Now her mom was insisting that they couldn’t attend Bobby’s Steel Pier show,  because they were expecting Easter guests at their Jersey shore house.

But Gloria Ferrino,  Linda’s mom,  needed snacks for her guests,  so they headed to Planter’s Peanuts in Atlantic City.

“We go in,  and the young teenage clerk suddenly drops everything.  ‘Oh my God,’  she screams,  ‘Bobby Rydell is out on the boardwalk –  I’ll be right back!’

“She left her register and ran out,”  Linda  (now Linda Hoffman)  recalls.

(Who knew that an order of nuts could change your life?   That’s Planters Peanuts on the Atlantic City boardwalk,  on an undated postcard.)

That’s when Linda’s mom sprang into action.   Grabbing her mortified daughter,  she elbowed her way through the crowd to tell Bobby,  “This is my daughter,  and she has your photos all over her room.” 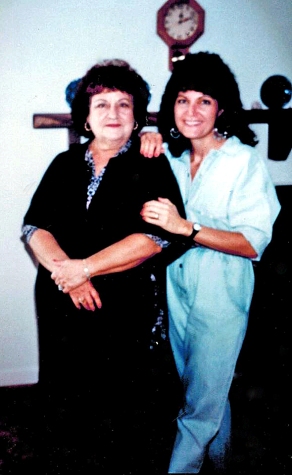 (Co-adventurers:  A grown-up Linda with her mom,  Gloria Ferrino.)

“She’s painfully shy,” Gloria sighed to another woman,  as Linda cowered behind her.

Needless to say,  that other woman’s name was Jennie Ridarelli….

And,  yes,  Bobby’s mom ensured that Linda and her parents got backstage passes that night,  and that Linda got her photo taken with him.

“I grew up in Flourtown,  which was very rural then,  and I was introverted and shy.   I couldn’t even talk to him,”  Linda recalls,  laughing.   “He must have thought I was a little slow.”

But the parents hit it off,  and Linda found herself helping Jennie Ridarelli answer Bobby’s fan mail by addressing envelopes at their house.

“His parents starting treating me like the daughter they didn’t have,  and Bobby was like an older brother.  At least I could talk to him now.”

By age 13 or 14,  Linda was helping Frankie Day,  Bobby’s manager,  in his Philadelphia office at 1405 Locust Street – home to Cameo-Parkway Records.

“I was just a kid,  and I was listening to people like Chubby Checker and the Dovells record in the studio.”

HEARD  IT  THROUGH  THE  GRAPEVINE

In those pre-Internet days,  fan clubs were the major way that stars communicated with their young audiences,  and Frankie Day encouraged fans to open chapters all over the world.

Chapter presidents were invited to meet-and-greets with Bobby,  and got the first copies of his new records.   Regular members got Bobby Rydell newsletters – with information passed down from Linda.  They were also urged to petition local radio stations to play Bobby’s songs.

“It was an enchanted time,  with a memory for every phase of my life,”  Linda recalls.

She saw Bobby perform ringside at the Copacabana,  where he debuted to smash reviews at age 19.

(Bobby was the youngest headliner ever to perform at the Copacabana.   Raved Variety magazine,  “Nobody else seems to count at the Copa this season except teenage fave Bobby Rydell.”)

On Linda’s 16th birthday,  he sang “Happy Birthday” to her from the Latin Quarter stage in New York.

And he performed at her prom at Sciolla’s Supper Club.

But her wildest memory dates to 1964,  when Bobby co-hosted the nationally syndicated Mike Douglas Show….