When a friend gave us a fabulous photo album crammed with Philadelphia area nightlife photos from the 1960s,  we had no idea how to identify the hundreds of celebrities, politicians and “just plain folks” in its pages.

But that’s before we learned that  –  while the rest of the world operates on six degrees of separation  –  Philadelphians know just about everyone in this city of neighborhoods.

Early on,  we took our album slide show to the South Philadelphia Older Adults Center and the Charles Santore Library,  both on Passyunk Avenue and both filled with longtime residents.   (And many thanks to Older Adults program director Deborah Hoffer and librarian Jeanne Hamman for setting up those shows.)

(Joey Giardello,  left,  and Rubin “Hurricane” Carter before their legendary 1964 bout.  That’s Arthur Tavani,  the original owner of the photo album,  at center.)

“That’s Joey Giardello?”  I asked excitedly when people called out his name.

(Joey Giardello’s bronze statue on E. Passyunk Avenue at South 13th
and Mifflin Streets.  It was unveiled in 2011.)

“Ehhh, he’s a bum!  He’s from Brooklyn!!”  someone yelled from the back of the Older Adults Center,  and pandemonium instantly reigned.

And that’s when we knew this was going to be fun.

SUNDAY  IN  THE  KITCHEN  WITH  GEORGE

But our first real indication of the treasures held in our photo album came from fellow Philadelphia Dumpster Diver George Felice,  whose fabulous,  art-filled home you may have visited on our website.

George,  who helped produce the Philadelphia Doo Wop Festival at Penn’s Landing for many years,  grew up collecting doo wop records and singing on the street corner in his Germantown neighborhood.

(The popular TV host of  “Ed Hurst’s Aquarama”,  which originated at South
Philadelphia’s Aquarama Aquarium from 1958-1965,  is at left.  That’s Art Tavani at
right,  but who is our mystery woman?)

George,  whose South Philadelphia parents still shopped at the Italian Market with his Aunt Lucy and Uncle Joe George,  and whose aunt-by-marriage owned George’s Luncheonette  (now Porto’s)  at 11th and Wharton,  also recognized wildly popular South Philadelphia comedians Fisher and Marks,  who played at Palumbo’s and other local clubs.

“So, check this out,”  George said,  casually dropping a Latin Casino folder on the table.

Inside,  was a photo of…Fisher and Marks,  comedian Joey Bishop,  George’s Aunt Lucy and Uncle Joe,  and….

But to know one Philadelphian is to know 20 of them,  and George immediately introduced us to people like  “Golden Voice Harry” Schmitt,  lead singer of Cornerstone,  the Philadelphia R&B doo wop group.

Harry,  who got his start as a street-corner singer in Manayunk,  knows both music and boxing,  and he immediately confirmed that heavyweight champion Joe Louis was among our album’s celebrities… 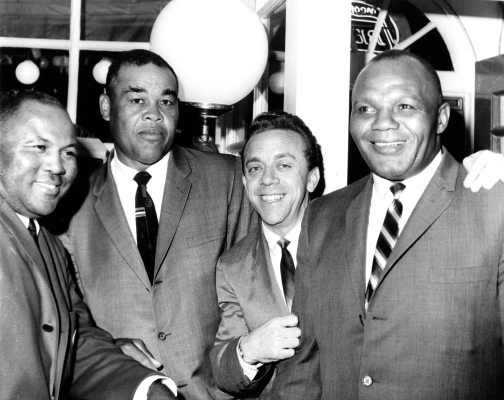 George also introduced us to King Arthur and the “Queen of Doo Wop”  (a.k.a. Carlos Alvarez and Janet Cedrone Alvarez).

King Arthur started on Camden radio station WCAM in the 1960s,  and managed local groups like The Destinations.  In addition to his daily online show,  you can hear him on Cruisin’ 92.1 every Sunday from 9-11 pm. 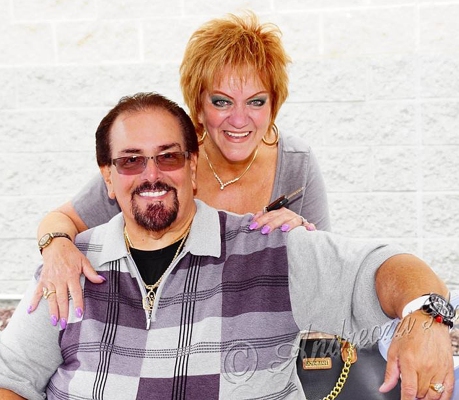 Janet,  the owner of Cedrone’s Flowers at 8th and Lombard Streets,  is the daughter of Rock and Roll Hall of Fame member Danny Cedrone,  who played lead guitar on  “Rock Around the Clock”  with Bill Haley & His Comets.

And,  even with many musicians already identified in our album,  they were able to help us crack some real mysteries,  like the identity of South Philly’s elusive  “Spanky”… 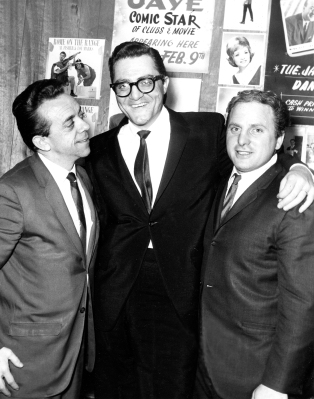 (Everyone recognized the man nicknamed  “Spanky”  at right as a Little League
coach and assistant to comedian Pat Cooper,  center,  but King Arthur and Janet
finally produced his name:  Gabriel DiFeliciantonio. )

And just when we thought the Angels of Synchronicity had tossed all their presents in our laps,  we hit another big coincidence in a building that Joey Giardello would still surely recognize….