Starting today,  we invite you on a new tour,  showcasing the inspiring home and garden of Michael Martin Mills and Randy Dalton.

Randy joined the Dumpster Divers at their second meeting in 1992.  A found-object artist,  gardener,  and initiator of the “Do Blue” campaign to support arts funding,  he has volunteered at Powelton Village’s Community Education Center since 1977,  doing everything from serving on the board,  to organizing exhibits,  to stripping paint from yards and yards – and yards – of paneling.

Michael,  Randy’s longtime partner,  spent 27 years as an editor at the Philadelphia Inquirer.  A singer,  choir member,  and avid gardener,  he is the Royal Horticultural Society’s North American Registrar for new rhododendrons.  (And,  yes,  the couple have more than 300 varieties in their garden.)

And while Michael is not an official Dumpster Diver,  he has made found-object art since the 1970s…

(Michael, left, designed the couple’s dining room table, made with wood from trees in
their yard, and constructed the fun plumbing-fixture candelabrum at right.)

ART  AND  IMAGINATION  INSIDE…

Michael and Randy’s two-story home in the Mount Airy section of Philadelphia is filled with sunlight,  art,  and clever,  repurposed furnishings,  trims and light fixtures…

(The living room brims with stories,  from the Victorian monastery chest and WPA
portrait of Marian Anderson,  to the twig rocker and found-object lamps.)

…AND  A  GARDEN  PARADISE  OUTSIDE

Which makes their unexpected urban garden a double delight,  filled with everything from exotic Franklin,  handkerchief and pawpaw trees;  to lovingly massed rhododendrons,  azaleas and exotic plants;  to intriguing garden sculptures. 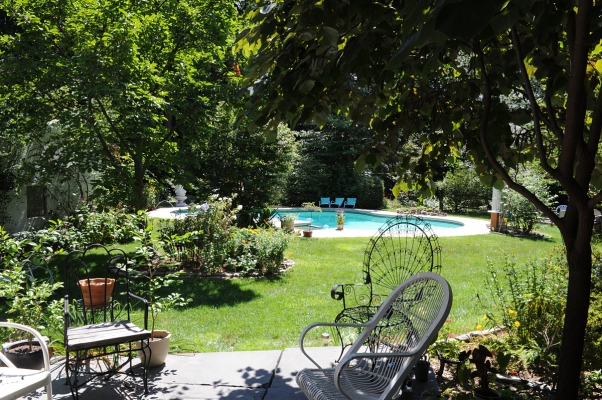 (Where it all began: The couple’s original two-thirds of an acre property was only a grassy lawn and pool with several mature trees when they bought their home.)

A decade ago,  they purchased the neighboring lots which once surrounded a nursing home,  extending their garden magic across another 1-1/2 acres. 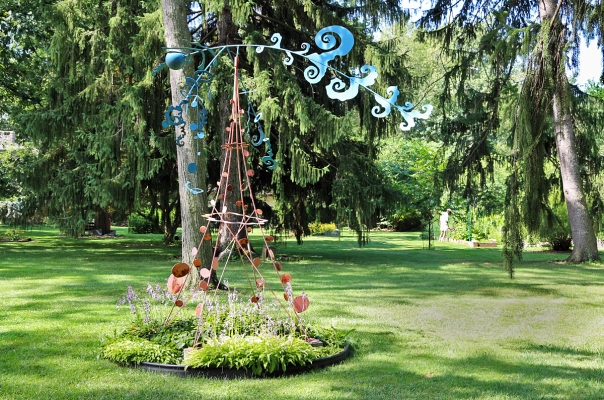 (A Ricky Boscarino kinetic sculpture communes with the massive
Norway spruce trees in the new garden.)

But don’t just take our word for it…

(Dave checks his images while leaning against one of the huge black oaks that
once surrounded the High Oaks Nursing Home.)

Click here to enjoy the late summer warmth,  even as autumn chills our area.  It’s just beyond the garden gate….