Like most South Philadelphians who didn’t get Festival tickets or flee to the shore,  we’ll be home clutching our parking spots this weekend.

I  THOUGHT  THERE’D  BE  CHEESESTEAKS….

(One of the hundreds of banners lining the route from city hall to the art museum.  And, yes, these World Meeting of Families visitors were noshing on Subway sandwiches by the fountain.)

So what was there to see between city hall and the art museum?  A solid mile of metal barriers…hundreds of identical food tents, with soda already in the refrigerator cases…walls of WaWa water pallets (they reportedly donated 1,000,000 bottles)…piles of folding tables and chairs…40 Jumbotron supports…metal scaffolding with rough wooden shacks on top (for press studios, among other things)…smiling out-of-town pilgrims with World Meeting tags around their necks and clear plastic backpacks…Philadelphia mounted police (I haven’t seen those since I moved away in the ’70s)…a reported 3,000 port-a-potties (apologies to people hosting events anywhere else on the continent this week)…strangely undersized cardboard trash and recycling cans…banks of portable urinals (barely, as it were, hidden behind portable screens)…and rows of plastic sinks…

(By Saturday, the Parkway museums will be closed, and those little blue sheds and sinks will be open for, uhm, business.) 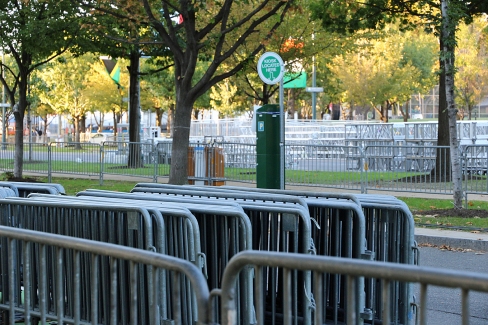 (“Where is everyone?” A Parkway parking kiosk awaits donors behind rows and rows – and rows – of barriers.)

And, yes, those blocks and blocks of white food tents were identically set up with Blue Bunny ice cream coolers, already stocked Coca-Cola cases, and identical covered pans and trays. 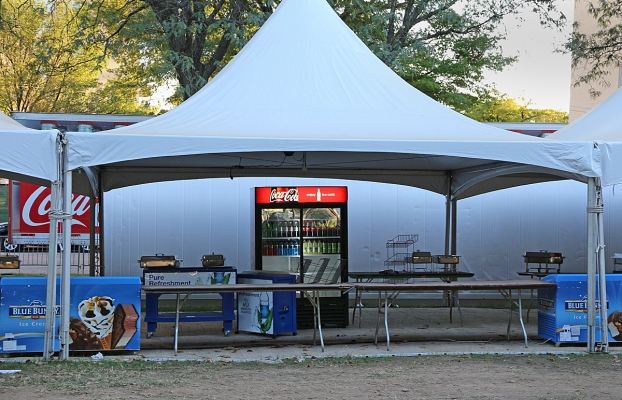 (Pepsi drinkers, stock your coolers:   It’s a Coca-Cola world out there.)

(Arm-wrestle you for a seat?) 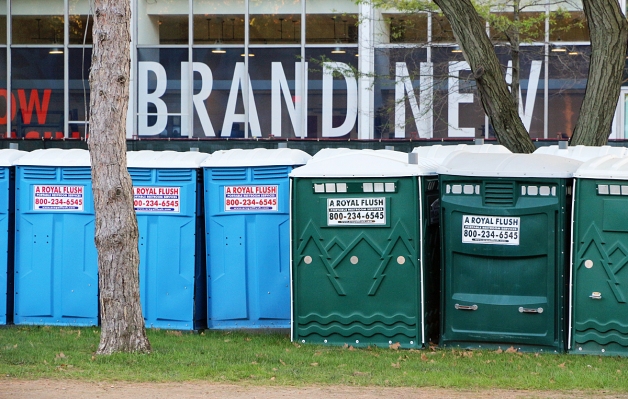 (And, yes, that sign describes the building, not the portable johns, but visiting pilgrims can only hope…)

FIRST (AND LIKELY ONLY) GLIMPSE OF THE STAGE

(A far-off preview of the stage…

…and the supports for one of the 40 Jumbotrons that will provide most pilgrims’ view.)

(Front and center on the Parkway is the place to stand to avoid this view.) 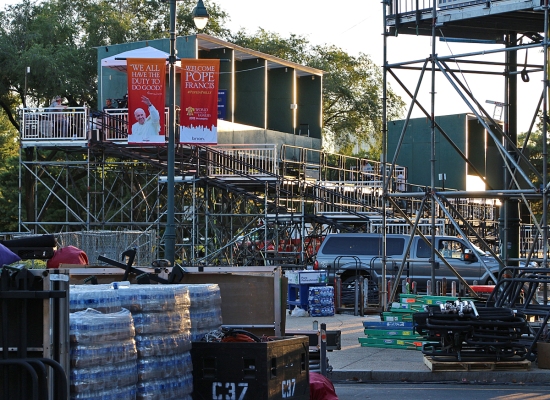 (A look at the scaffolding and the unlovely sheds that will serve as media headquarters. And, yes, you can see some of the 1,000,000 water bottles donated by WaWa in front.

(The Thinker will have a lot more to think about this weekend, including keeping his front yard clean.)

THE FESTIVAL THAT NEVER SLEEPS…. 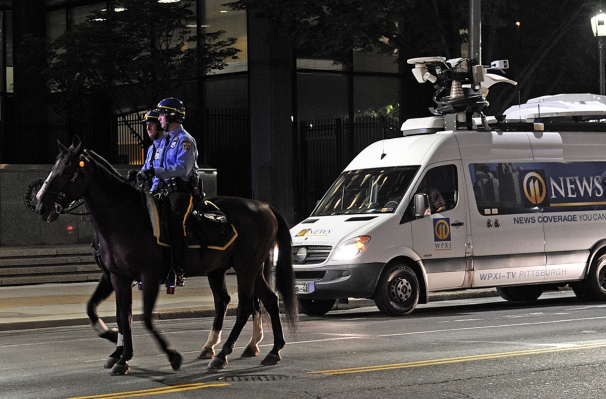 (Mounted police pass the city building at 1515 Arch Street, while a news truck from WPXI-TV in Pittsburgh scouts for early stories.)

Heading to the subway,  Dave caught the perfect summary photo:  The moon,  a street light,  city hall,  the PNB building,  an inspirational banner of the Pope sponsored by Discount Tire.   What more could you want? 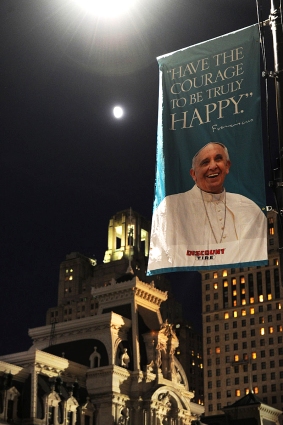 So yes, we can now say we’ve been to the Festival – and returned home to an unmistakably South Philadelphia greeting at Francoluigi’s on 13th and Tasker Streets:

And, yes, that’s the same Francoluigi’s whose opera-singing owner was profiled in this week’s Inquirer.  Only in Philadelphia….

2 thoughts on “On the Pope Festival Trail…Without the Pope”