With our cars safely parked and no festival tickets in hand, we had no intention of joining the teeming mob around Pope Francis this weekend.  But, hey:  After staring out at the half-empty South Philly streets on Saturday  (“Just look at those empty parking spots!”),  we couldn’t sit home any longer.

So at 4 pm,  we headed up eerily traffic-free Broad Street,  past the National Guardsmen,  souvenir hawkers,  concrete barriers,  and (even more) blocks of port-a-potties,  until we reached the Jumbotrons heralding the Pope’s visit to Independence Hall… 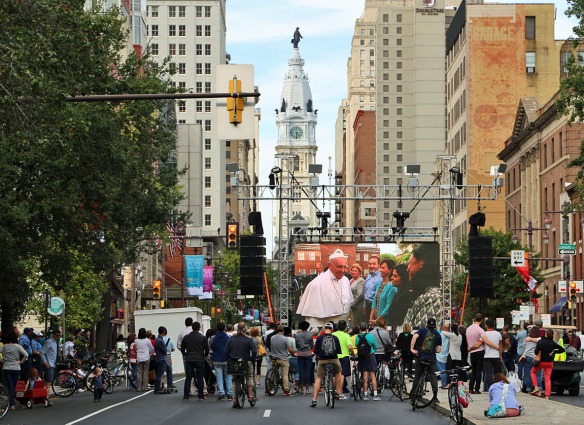 (A crowd gathers at Broad and Lombard Streets with City Hall in the background
to watch the Pope arrive at Independence Hall.)

Our trekking goal?  The south side of City Hall, the farthest point in the Saturday night Popemobile parade from the Eakins Oval stage and back – and our best shot to see him all weekend.  By 5 pm, we were standing in the Broad Street security line.  By 5:30, they announced that no more people would be admitted.

And by 6 pm, they had miraculously re-opened the gates and we were standing on the other side. 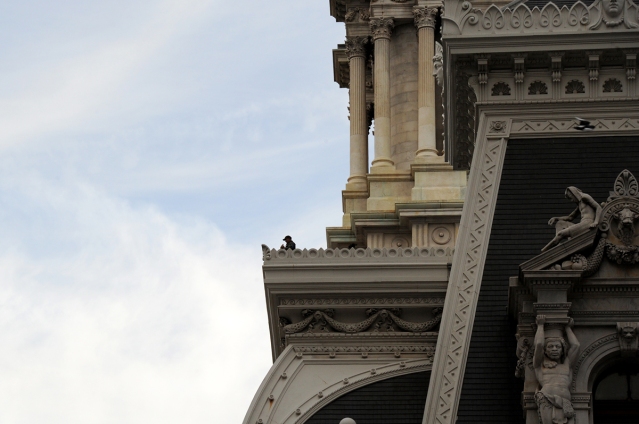 (A security team member scans the crowd from a City Hall roof.)

And, yes, to the self-important loonies who apparently spewed non-stop hate yesterday at every check-in point against Catholics,  Muslims,  the Pope,  Mary,  and anyone else who didn’t buy into their fanatic version of a wrathful Jesus (i.e., all of us),  my left ear is still throbbing from the thundering bullhorn you refused to turn down.  I only hope you haven’t permanently damaged my hearing – or that of the thousands of other adults, children and infants in line.

So, did we see the Pope?  I’ll let Dave’s photos tell the story:

(The scene from the south end of City Hall:  People check out Sister Sledge and
other Eakins Oval performers on yet another Jumbotron.)

(Cell phones and iPads in the air:  Here he comes…) 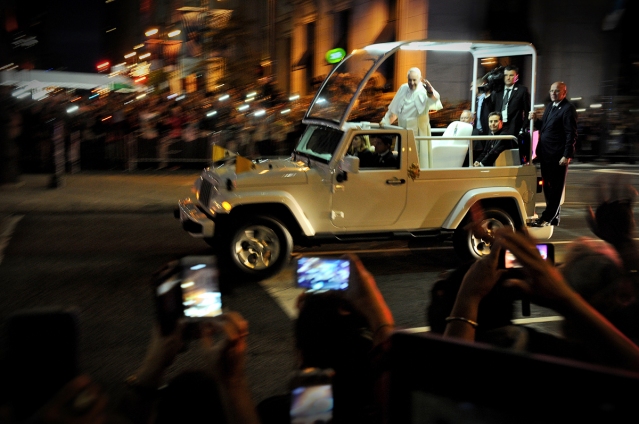 (Score!  And, yes, long-armed Dave captured this photo by holding his camera
over his head and panning the street.)

So,  as the Popemobile disappeared from sight,  we filed down Broad Street with thousands of other pumped-up visitors…past the port-a-potties and members of that braying hate group (now wearing cardboard Pope mitres)…past pallets of free WaWa water,  which conscience-bound pilgrims were afraid to “steal”…past three young kids break-dancing for donations…past a row house step with a free Buddha statue that I tucked under my arm…and into Francoluigi’s in South Philly for a pizza slice and Peroni. 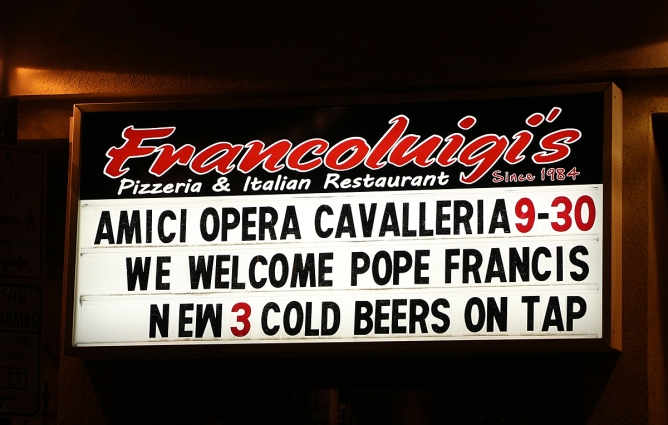 How did I put it in Friday’s post?  “Only in Philadelphia….”