It was March, 2014 as I nervously approached Virginia Tavani Romano’s front door with a laptop full of photos in one hand and a potted plant in the other.  For months, I’d been poring over Art Tavani’s magical 1960s photo album, trying to unlock its mysteries. Now, only four blocks from home, I was about to meet his sister and her nieces Suzanne, Clair and Elaine.

“Let’s hope they have a sense of humor,” I fretted, yanking at my newly dyed violet and teal hair….. 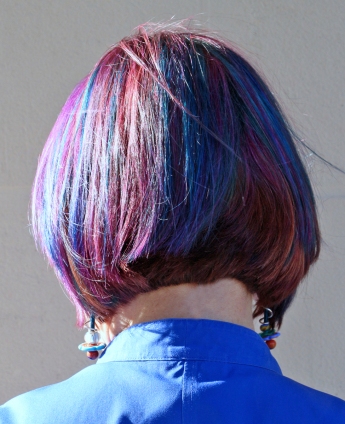 Three minutes later, I was ensconced in Virginia’s living room, with a wine glass in one hand and a plate in the other.

“Help yourself!” she cheerfully invited, as I contemplated a coffee table overflowing with Italian Market antipasto, sausage, cheese, bread, crackers, olives, and more delicacies than I can recall.  “There’s more in the oven!”

And, for the first time in days, I was breathing normally again.

(Virginia and her guy Joe, with nieces Suzanne and Deebeanne
at our 2014 holiday party)

Over plate (after plate) of food, Virginia told me that she and Arthur had grown up in the South Philadelphia row house where I was now sitting – a house that had once belonged to their maternal grandparents, the DeSimone family.

Their grandparents ran a tailor shop on the first floor, making custom pants for up-scale accounts like John Wanamaker’s department store.  Their daughter Almida would run the finished garments to Wanamaker’s, and in January, 1906 she married Italian immigrant Joseph Tavani, whom she met when he boarded at her parents’ house for 25 cents a day. 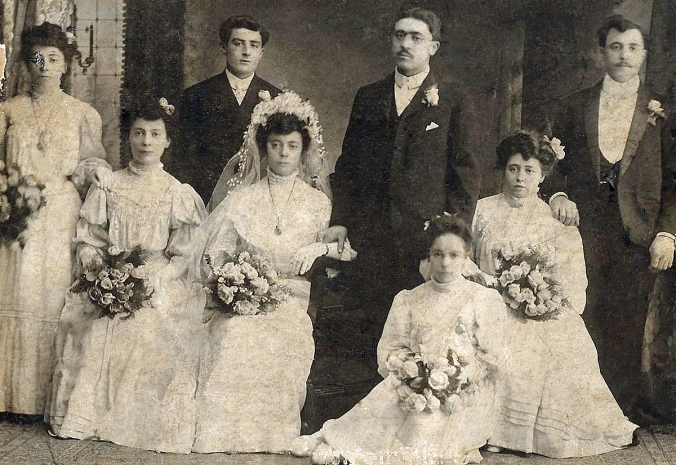 (Almida and Joseph Tavani, center, on their wedding day)

Almida and Joseph eventually raised 7 boys and 3 girls in the house, including Art and Virginia.

Arthur Tavani – affectionately known as Artie to his family and Art to his friends – was born in 1923, and is fondly remembered for documenting everything from celebrity appearances and weddings to family cook-outs and birthdays with his ever-present camera.

(Suzanne and Deebeanne look through the album at our 2014 holiday party.
Their late father Joseph was Art and Virginia’s brother.)

By the 1960s, he was writing nightlife pieces for the South Phila. American and Philadelphia Exclusive newspapers, and was publicizing everything from star-studded events at Palumbo’s to beauty contests and talent shows at the “Order of Brotherly Love” Italian social club.

Art died in 1996 and his wife Theresa Settembrino Tavani died in 2006 – which is likely when the album started its circuitous journey.  Sadly, Arthur, Jr., his only child, died in 2014, before I met him.

Virginia didn’t know everyone in Art’s wide network of friends, of course, but she effortlessly reeled off name after name from the 50-year-old photos.

And before long, we were poring over Suzanne’s collection of family photos taken by Art himself.

Three hours later, Dave met me at our door.

“Cannoli and cream puffs!” I gleefully exclaimed, holding up the bag that Virginia had packed for me.