(Back from vacation, Kate continues the story….)

Discovering that the mystery owner of our star-studded 1960s photo album was named Arthur Tavani and that he once worked for two South Philadelphia newspapers was pretty exciting….

(Art Tavani,  with his trusty camera,  joins the crush around singer Tony Bennett.
And,  yes,  the patterned carpet identifies this as Palumbo’s.)

Because,  truth be told,  I’d developed a definite fondness for Art Tavani and his South Philadelphia world in the months since I learned his name.

An online search confirmed that Art died in 1996,  but it also revealed that the Central Library had copies of the South Phila. American newspaper for Dec., 1963 through Sept., 1964 – the period that roughly coincided with Art’s photo album.

And,  as much as I hate scrolling through microfiche,  I was ecstatic to find Art’s chatty nightlife columns in every edition…. 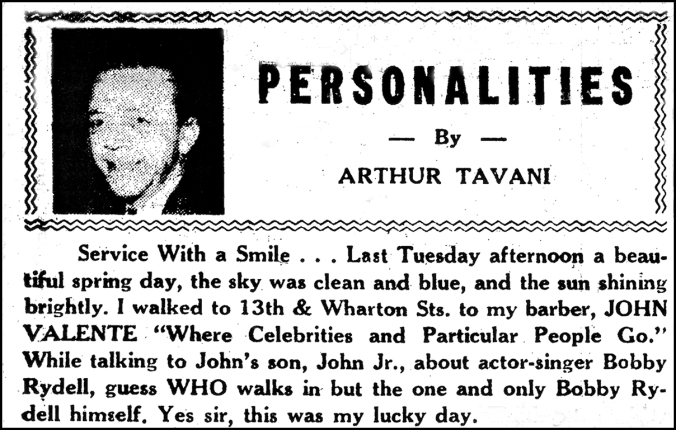 Art’s columns were packed with local news about celebrities, nightclubs, judges, politicians, Italian social clubs, sports figures, TV personalities, beauty contests and more.   And,  every so often,  I’d be startled to find an image from the photo album, complete with a helpful caption…. 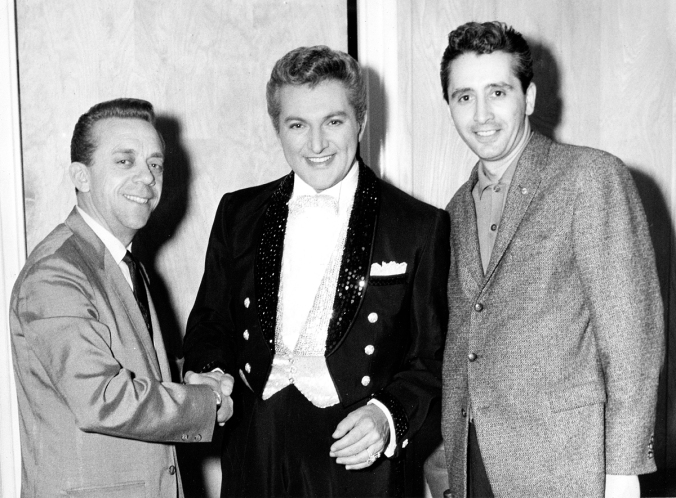 “Arthur Tavani, South Phila.’s columnist and man on the spot is pictured interviewing handsome Liberace at the Latin Casino in New Jersey,” read the front-page caption in the April 3, 1964 South Phila. American.  “On the right is good looking Joe (Poe) Viola, who along with Tony Faranee, is handling the Liberace program promotion.”

So I did two things:  I volunteered to give an album slide show at the South Philadelphia Older Adult Center, which was within walking distance of former album nightspots like Palumbo’s, the CR Club, and the Venus Lounge. Surely someone there would remember those days.

And I offered to donate Art’s cultural photo treasure to Temple University’s Urban Archives once my research was done.

But that was before I knew about Art’s sister.

“Hello?” I finally choked into the phone. “You don’t know me, but I think I know your brother….”