A major perk of writing our  Unexpected Philadelphia  blog and website is the connections we make with intriguing Philadelphians,  past and present.

In October,  2016,  we led you on a photo tour through the art-filled home and garden of Philadelphia Dumpster Diver Randy Dalton and former Inquirer editor Michael Martin Mills.   Among their treasures was this 1963 portrait of then-President John F. Kennedy by the late Philadelphia artist Lou Hirshman….

Which is what led us last week to a fun phone conversation with Hirshman’s son and daughter,  William  (Bill)  Hirshman and Deborah Donnelly.

Louis Hirshman was born in western Russia around 1904 and immigrated to the United States with his family in 1909.   A lifelong Philadelphian,  he left school in the 10th grade and was creating art professionally by 1920.

His early endeavors included oil paintings,   commercial art,  and even avant-garde filmmaking,  but by the mid-1930s he began experimenting with “constructions”,  his witty and often biting,  three-dimensional framed caricatures of notorious public figures like Hitler,  Mussolini and Standard Oil magnate John D. Rockefeller and of more beloved icons like Groucho Marx,  Harpo Marx and Albert Einstein. 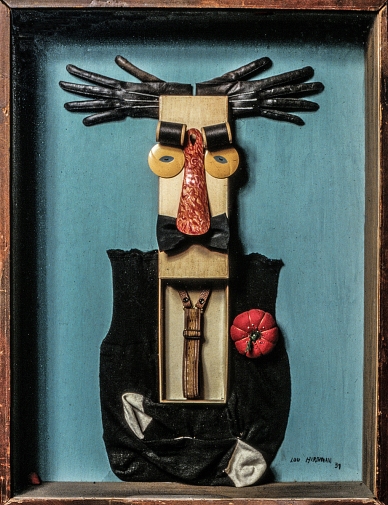 Hirshman’s 1937 Groucho caricature uses a wooden box with a sliding lid for his face and shirt, and features spool and button eyes,  glove hair,  a pincushion boutonniere,  a bow tie mustache and a shoehorn nose,  among other readily identifiable objects.

A  (literally)  mop-topped Albert Einstein sports a brush nose and mustache,  an abacus chest,  and a pencil-and-paper collar affirming that 2+2=2+2.   This 1940 work is in the collection of the Philadelphia Museum of Art.

By 1938,  Hirshman’s three-dimensional caricatures earned him a two-page spread in Look magazine,  and his work appeared in publications like Vanity Fair.

But Hirshman – who joined the art faculty of Philadelphia’s famed Fleisher Art Memorial after a World War II Army stint,  and who served as the faculty director of the evening art school from 1960 to 1977 – was an intensely private man who never felt the desire to sell his artwork at a gallery during his lifetime.

Hirshman in 1985 with a 1949 self-caricature featuring a pancake face,  lemon slice ears,  and metal nails for hair.   He stands on an artist’s palette with two crossed paintbrushes rising like good-natured devil horns from his head.

Hirshman’s studio lay in a back bedroom of his Regent Square row home in Philadelphia’s University City section,  positioned to catch the northern light.

“Dad’s studio was his sanctuary,  and it was pretty much off-limits,”  recalls son Bill.   “We didn’t go in while he was working.”

An undated photo of Lou Hirshman’s studio,  which his son described as “a neatly arranged collage in itself.”

Fourteen years older than his wife Betty,  and considerably older than his two children,  Hirshman rose at 6 a.m. to do yoga and often emerged from his studio only to eat.   Following an early dinner,  he would take a meditative,  five-mile walk to his job at Fleisher,  rarely arriving home before 10 p.m.

“Art was his life,  but he was rarely published and never publicized himself” in later years,  recalls Bill,  who has made it his mission to see that his dad’s work is not forgotten. 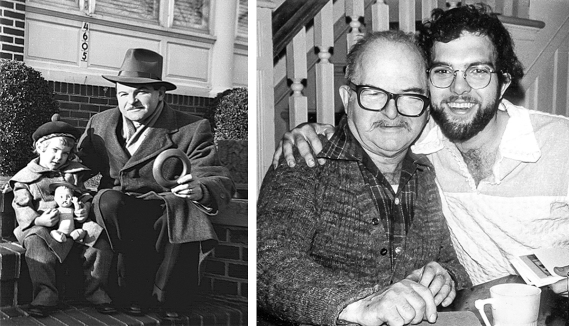 Lou Hirshman poses with his daughter Debbie in 1948 and his son Bill in 1980.