Last fall we introduced you to the art-filled home and fabulous gardens of Philadelphia Dumpster Diver Randy Dalton and his longtime partner Michael Martin Mills.

And,  yes,  you can still tour their house and garden on our website,  and read the blog post about them here.

But Randy had a magical surprise up his always blue sleeve – one we planned to interview him about later this year:   His Blue Grotto art environment.

(Randy’s Blue Grotto contains hundreds of blue lights,  sculptures,  found objects,
photos and more,  in support of his  “Do Blue!”  campaign for the arts)

Then everything changed:   Randy passed away on Friday, Feb. 5,  after suffering a stroke and characteristically donating his organs to keep others alive.

And so we’re sharing this wonderful treasure with you now. 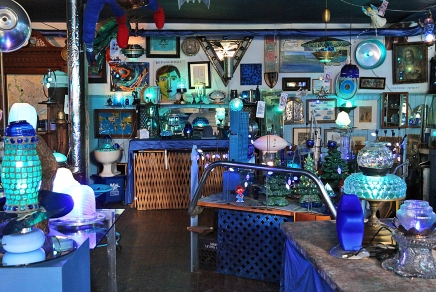 (Randy’s fun,  found-object man lounges on a chair at right.)

Spurred on by Congress’s attempt to cut national arts funding following a controversial Robert Mapplethorpe photography exhibit organized in Philadelphia,  Randy has been urging people to “Do Blue!” in support of Philadelphia arts and arts funding since 1989.

Over the years,  he’s designed and given away thousands of blue buttons – including the one he’s wearing in the photograph at top.

But Randy’s biggest blue achievement is arguably his fabulous Blue Grotto,  a “studio/exhibition/gathering space” housed in the basement of the Community Education Center,  in West Philadelphia’s Powelton Village section.

Randy has been a volunteer at the non-profit performing arts center since 1977,  doing everything from serving on the board,  to organizing exhibits,  to stripping paint from yards and yards – and yards – of paneling. 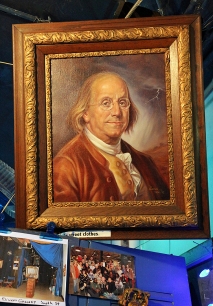 And as the center’s resident artist,  his blue environment has grown into pure,  inspiring magic.

MESSAGES  TO  AND  FROM  HEAVEN

As Randy’s Do Blue! campaign entered its 27th year,  he never lost his enthusiasm for it,  for art – or for life. 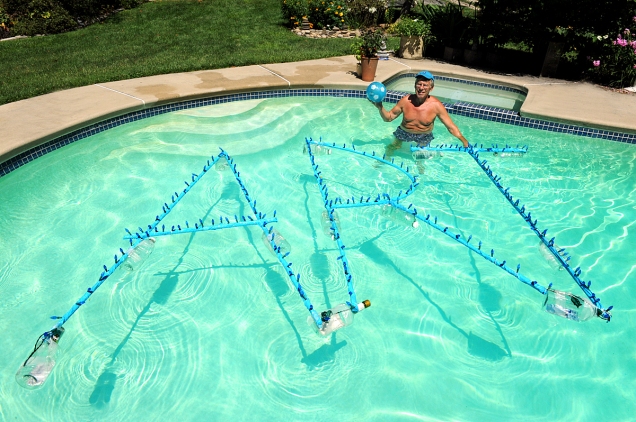 (Randy’s pool installation sends the words “ART” or “EARTH” up to passing
airplanes in blue lights.   Now he’s sending blue light down to all of us….)

So wear a little blue today in Randy Dalton’s honor.  And remember:

With love to Randy and Michael –

3 thoughts on “In Memory of Dumpster Diver Randy Dalton: The Blue Grotto”