What happens when a longtime potter with a background in teaching and television takes a papermaking class?

If it’s Philadelphia area artist Carol Cole – with a love of multicultural art and a penchant for found objects – the results probably won’t fit in your stationery drawer….

Carol’s  “Turn of the Century: 500 Familiar Objects from 1999”  is made of paper pulp imbedded with – yes – 500 real objects ranging from a wristwatch to a wrench.   This outdoor version is cast in fiberglass.

Today,  our  Unexpected Philadelphia  website takes you on a new photo tour – this time to the intriguing home, garden, and studio of Carol Cole and her husband Elliot.

Elliot & Carol in their garden

Carol,  as you’ve probably guessed, is a member of the Philadelphia Dumpster Divers,  that inspired band of artists who have played,  exhibited and produced witty,  found-object art together since 1992.

And that 1993 papermaking class led to a whole new direction:   Making large-scale pieces that evoke the ancient,  indigenous art she’s loved since her Tucson childhood. 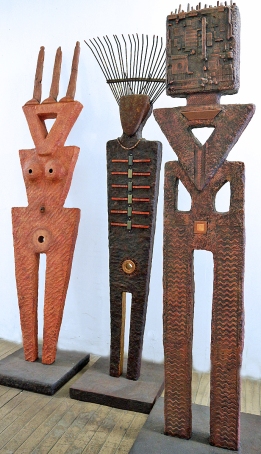 Resembling monumental stone artifacts,  these handmade paper-pulp pieces can be easily lifted by one person.

Carol incorporates everyday objects selected for their color and archetypal shape in her work,  using them in multiples and out of their usual context. 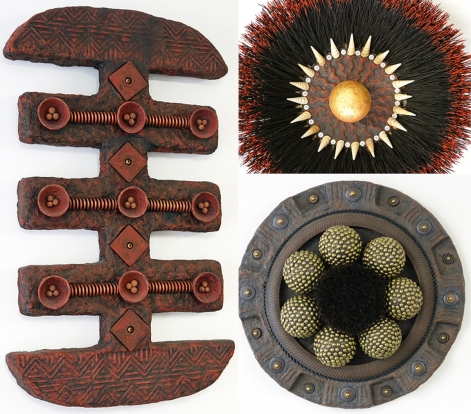 Metal springs,  mulch balls,  floor brushes,  bike tires and buttons are only a few of the unexpected elements in Carol’s work.

The art-decked dining room is ready to greet friends.   Their richly colored dinnerware is by former Philadelphia potter Marge Margulies.

And don’t miss their lush perennial garden,  just a stone’s throw from the Philadelphia border…. 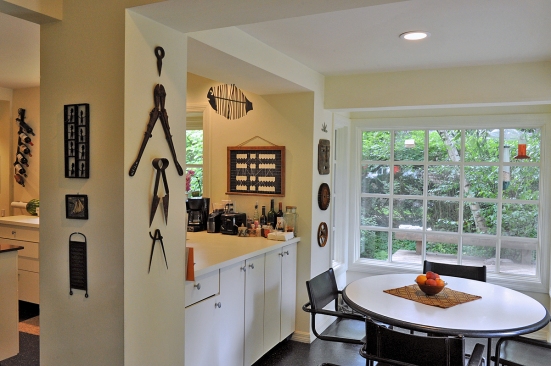 The converted back porch – now a sunny dining and work area – offers an ever-changing view of the garden and the wildlife attracted to the generous feed that Elliot scatters. 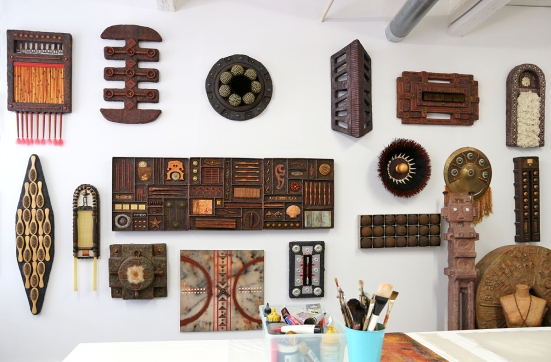 After 34 years at the now-closed artist studios at 915 Spring Garden Street,  first as a potter,  Carol is happily resettled at the 20 Herman Street Studios.

As always,  when you arrive at our website,  simply click on any thumbnail photo to scroll through much larger versions of all the photos.   Each large photo also comes with a scrollable caption that shows on non-mobile devices like laptops or desktop computers.

You can meet her during the citywide POST  (Philadelphia Open Studio Tours)  on October 8-9,  when she’ll welcome visitors to her second floor studio at 20 Herman Street in Germantown.   Hours are noon to 6 pm both days. 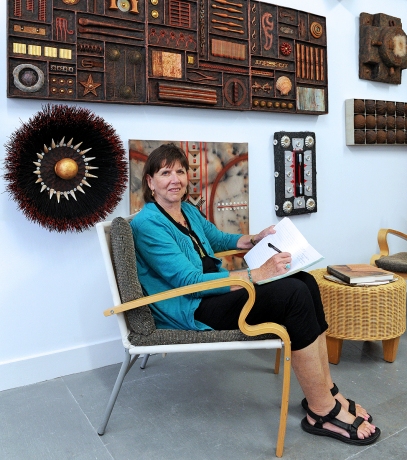 Carol sketching ideas in her studio….

Visit Carol’s website or the POST 2016 site for more details.  (And, yes, Dumpster Divers Betsy Alexander and Burnell Yow! will also be hosting an open studio then at their Raven’s Wing Studio, 2301 Naudain Street.)