When Philadelphia’s Please Touch Museum moved to Fairmount Park’s Memorial Hall in 2008,  they asked city artist Leo Sewell to build a replica of the Statue of Liberty’s torch and arm,  which had originally been displayed in the park during the 1876 Centennial Exposition.

Leo obliged the children’s museum – with a fun-filled,  40-foot rendition that features everything from toys and skis,  to discarded license plates and road signs.

Leo’s introduction to the joys of junk came early,  when he explored the dump near his childhood home.   His dad taught him to use tools,  and soon he was shaping and assembling industrial discards into wonderful new objects. 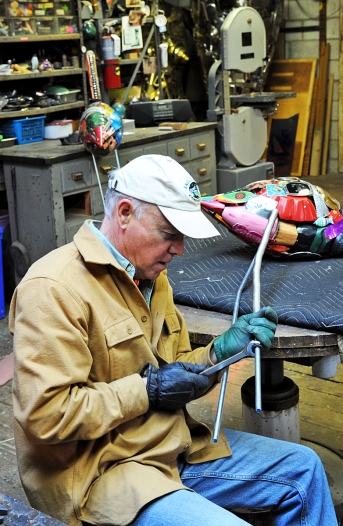 Leo constructs a flamingo in his studio.   The bird and its partner now grace the lobby of a Florida business building.

With a BA in economics and an MA in art history from the University of Delaware,  Leo was living every artist’s dream by the late 1980s:   supporting himself full-time with his art,  and turning out witty interpretations of everything from people and animals, to grandfather clocks and sideboards. 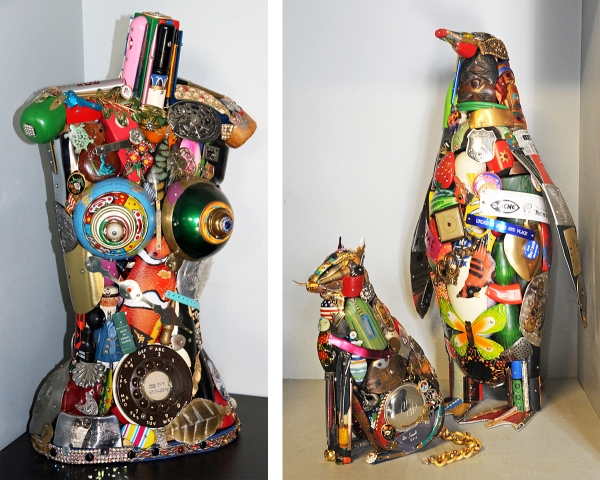 A female torso with a rotary dial navel and plastic fish abs holds court with a cat and  penguin.   Leo is best known for his human and animal figures.

Inspired by his work,  fellow “junk artists” Neil Benson and Len Davidson invited him to become a founding member of the Philadelphia Dumpster Divers – that merry band of local assemblage artists who socialize and exhibit art together.

NOTHING  UP  HIS  SLEEVE

Unlike many found-object sculptors,  Leo doesn’t start with taxidermy forms or other bases.   Instead,  he builds his pieces from the inside out,  adding layers of identifiable objects to form bones,  flesh and skin.   At the end,  parts of all three layers are visible.

Leo built up his “Ram’s Head Trophy” using everything from toys,  car logos and clocks, to a slide rule,  cabinet hardware and corn-cob holders.

1980 was a big year for Sewell:   He purchased his 1870s home,  a former carriage house in Philadelphia’s Powelton Village section,  and he met his wife Barbara.   The couple married in 1986 and have a daughter,  Abby. 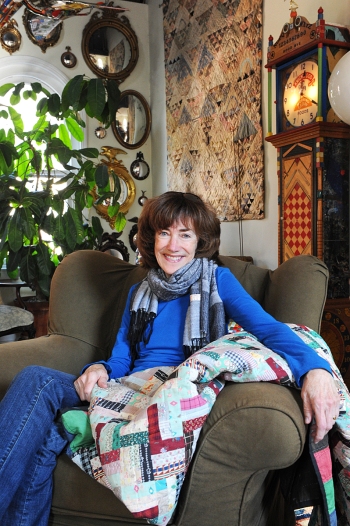 Leo isn’t the only family member skilled in fitting pieces together:  Barbara Sewell with one of her handmade quilts.

Their home is an inspiring mix of American furniture,  found and purchased art,  and Leo’s witty constructions.

Leo made the grandfather clock case and several of the smaller bulls-eye wall mirrors.  He also built the back on the church pew.  The graffiti painting is actually a rescued garage door panel. 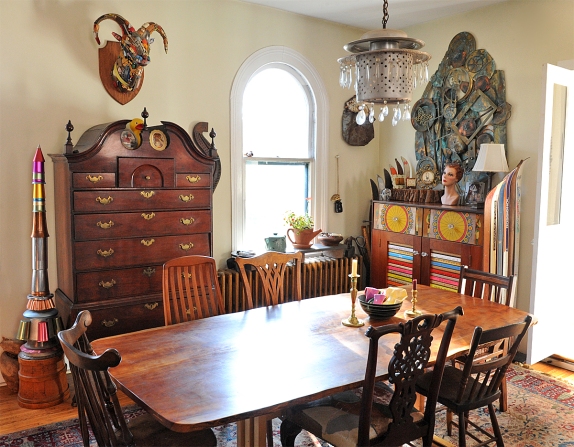 Leo made the ski-embellished  jelly cabinet,  the chandelier,  the found-object rocket ship,  the wall art….and the cherry dining table. 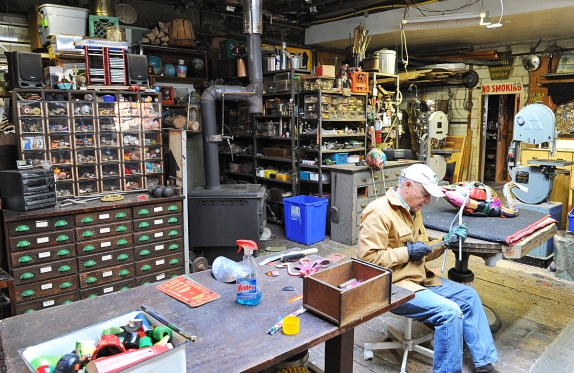 As always,   when you arrive at our  Unexpected Philadelphia  website,  you can click on any thumbnail photo to page through larger versions of all the images.    You’ll also see a scrollable caption under each photo if you’re on a non-mobile device like a PC or laptop.

Larger than life:  Leo with  “My Girlfriend With the Golden Globes”  and  “Trophy for a Big Chef”.