2016 was definitely not our favorite year.

We cleaned out and sold Kate’s parents’ home.   We learned more than we ever cared to about hospitals,  insurance,  Medicaid applications and nursing homes.

….that endless election campaign.   Not even the fun of our non-partisan “Flip the Script” photo project could wipe out the divisiveness of a candidate who relentlessly belittled women,  minorities,  the disabled,  the armed forces,  immigrants,  prisoners of war,  our allies,  the press – seemingly basic human kindness itself. 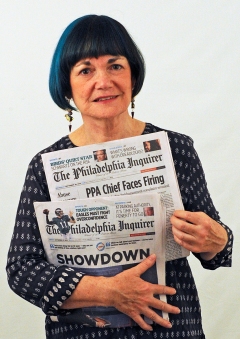 Dave, are you SURE we don’t have another comics section…..?

And by the time it all ended – amid reams of vicious fake news and a winner who lost by almost 3 million votes – we needed an extra-long holiday break.

So when we heard about the January 21 Women’s March on Washington – which rapidly morphed into almost 700 sister marches across all 50 states and every continent on earth – we quickly decided we were in – even if Kate  (perhaps fortunately)  had never learned to knit.

No badly knitted-by-her pink hat,  but Kate tries on a sign.

MARCHING  IN  THE  STREETS

So here’s our look at Saturday’s march on the Benjamin Franklin Parkway:   The sky was foggy,  but the vibe  (and,  happily,  the temperature)  was warm and upbeat,  and just what the doctor ordered…. 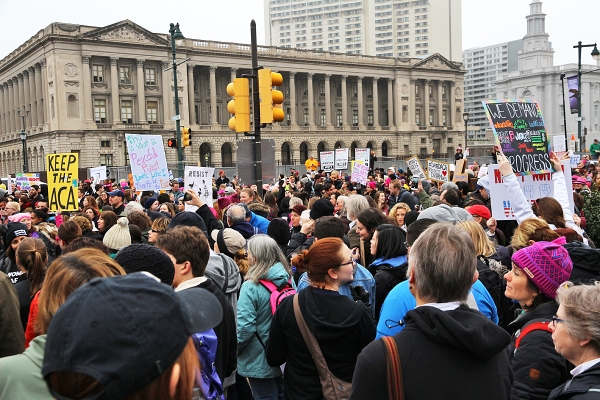 On the march:  Part of the Philly crowd preparing to head from Logan Square to Eakins Oval.

And,  yes,  we saw hundreds (and hundreds) of signs – from angry,  to heartfelt,  to pure thought-provoking fun….

THE  VIEW  NEAR THE EAKINS  OVAL  STAGE….

A few more reasons to love our Philly guys! 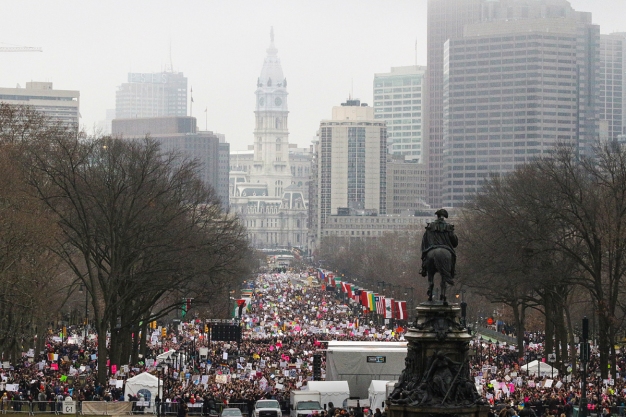 Even on a foggy day, you could see marchers and signs forever….

And,  yes,  this is definitely one “Nasty Woman” we’d want on our team…

HEADING  HOME – BUT  NOT  BACKWARDS 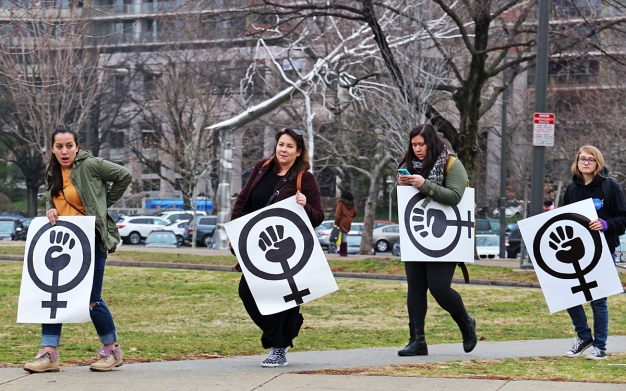 A parting tribute by the Franklin Institute….

WHAT  THE  WORLD  NEEDS  NOW

Uplifting?  Yes.  Energizing?  Definitely.   But neither of us was prepared for what we saw online when we arrived home:  Hundreds of thousands of women,  men and children, packing streets and holding signs in nations across the globe:

And,  while we don’t know how long the New York Times will keep this remarkable collection of photos up on their website,  we hope you’ll take several minutes to see what a mutually supportive human race could look like – and to share that link with your friends.